I may not be posting for awhile, but i will still be reading. today my husband went to the dr. because he has had a dry cough for about 3 weeks. they did an xray and he has a mass in his lung, the dr wants him to take prednisone and come back march 5th for another xray and we will go from there. :o(
(((((y'all)))))

Wednesday was rainy so we just mall walked so no pictures yet. If the weather ever changes I will be sooo happy !

Seems like I haven't posted in forever, but that is because I lead an extremally placid life out in the country. I don't know what's wrong...it hasn't even rained today(holy moly what did we do to annoy the rain gods???) Yesterday we switched from satillite to cable telly, can't tell if we like it yet or not. The installer came out and set up 3 boxes( yes, we all have our own telly) 2 of the boxes didn't work quite right, so he said he would leave them for s to watch and that we could exchange them at the office in the morning, which we did. All is working well now, plus we added some more channels. Then I went and picked up some Prozac at wallyworld, woo hoo 80 cents for a months worth, I guess I really am a cheap date, afterall.This is all I have to worry about,damn! Oh well, tomorrow is Wednesday, the day D ( son) and I run around, and if it isn't raining we are going out for a hike , probably on the beach , so we get some sun and exercise. I will try to remember to take my camera , it's a p.i.a. to use my phone, it doesn't do movies wish I had checked that out first. Also I want to say, Sunday was a funday, hanging out with everyone @ Scooter-forums Radio.. and chatting , it was great fun.

I sort of met my grandson today, although it was only via myspace. My oldest son has 3 children, he has never been married to any of the mothers. He did at least live with the last ones mother for 8 months , until she threw him out and his "best" friend moved in the same day. That is neither here nor there, just ancient history. The oldest child is a girl of 24, who wants nothing to do with him at all, which is ok, none of us has ever met her, so it is not like we are any part of her life anyway. The second is his son who just turned 22. My son met him for the 1st time last year when he turned 21. Since he was on his myspace page i went there to see if he would be my friend, but i had to get his last name in order to get to request him as a friend. I got his last name from my son J and requested to be added. He did add me and then he asked, have we ever met? He didn't know who i was at that point. So i wrote him back and said no, we have never met but your dad is my son. He has written back and says so do I call ya grandma now? and several other questions, which i have answered. I said call me what ya want, my name is kathy. then i told him that i had left a laptop with his dad that was for him, if he was allowed to have it. He says yes so i told him tell your dad you know i left it there for you...that way he will probably at least get it from him. The reason I had to ask if he were allowed to have it is because he lives in a group home, and has limited access to a computer...that was the reason i left it for him. Also because i took my old laptop on the plane when we went to visit the son, but my sweety decided that a little netbook would be much better to use while traveling than a 15" 8# laptop, the new one he bought me is a H.P. mini with a 10" screen and weights about a pound, maybe 2...it actually fit in my purse when we were on the plane coming home, how cool is that? it has a web cam and built in wifi, the only thing they don't have is a cd/dvd player which would suck if you needed to reload the software that came with it. Of course i just had to go over to staples and buy and external one( it is still a secret, but i paid cash so no big deal) at least i can put a couple of games on it now.
Anyway the newly "met" grandson wants to know when we can meet and i told him that the next time we come down to Cali, i would tell his dad ahead of time so that he can make arrangements for us to all go out to lunch and get to know each other better...how fun will that be? I have no idea of course, but he seems to like a lot of stuff that his dad likes, and i told him that his dad and i have the same very warped sense of humor. I hope it isn't too long before we go there again, but it could be until next post Christmas week. I guess I will have to tell my husband about it if we go sooner, but hey, life is full of little surprises, right?

We were in the desert last week...

We went to visit friends last week, it was 80 degrees f.! Mr.Punxxi always dresses in the proper attire for the environment... 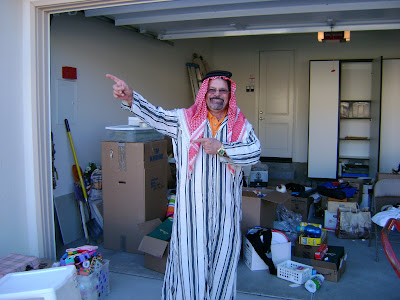 he is standing in front of our friends garage, they are just moving into their new house, which is absolutly beautiful,btw.